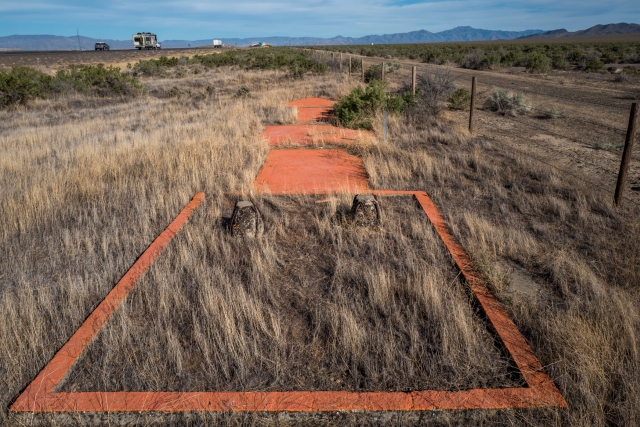 U.S. Airmail concrete directional arrow from the 1920s
We spent a couple of hours chasing down one of the old U.S. Airmail concrete directional arrows from the 1920s. The federal government funded the Transcontinental Airway System to be built every 10 miles or so along established airmail routes to help airmail pilots trace their way across America. With concrete arrows indicating the direction to the next beacon, a rotating light tower, and a shed that usually held a generator and fuel tanks, these beacons were once situated on air routes across the United States beginning around 1923. Many of the sites are now long gone. During World War II, numerous concrete arrows were destroyed so as to not help enemy pilots visually navigate the country.

We had always wanted to find one and our airmail map showed one pointing pilots East toward Chicago near where we were headed. We finally thought we spotted it, pulled over and was walking down a hill when we looked up and a state trooper had pulled in behind our Airstream. He said he was just checking to make sure we were ok. When we told him what we were looking for, he said this was his route and he didn’t know one was there so let’s all go find it together. That was fun!